The word “strategy” could use a strategy.

It’s used too broadly, rarely meaning the same thing for two people. It’s frequently stretched and contorted to incorporate myriad plans, priorities, and processes. And even when a CEO really does have a strategy, too often the people charged with carrying it out don’t actually know how to translate it into their day-to-day decisions.

Robert A. Heinlen wrote, “Man is not a rational animal; he is a rationalizing animal,” and that’s what’s seen in much of what passes for “strategy” in many companies: a collection of loosely related projects and initiatives that are already underway (or which executives desperately want to be underway) and which are assembled into a list upon which an amorphous “strategy” title is conferred.

In full disclosure, it took me years to really understand what strategy was, much less how to design one. The one book I wish I’d read much earlier in that journey is Good Strategy, Bad Strategy by Richard Rumelt.

If you’re like me, when reading it you’ll find yourself humbly nodding in guilty recognition of past sins as you read Rumelt’s descriptions of bad strategy:

A long list of “things to do,” often mislabeled as “strategies” or “objectives,” is not a strategy. It is just a list of things to do. Such lists usually grow out of planning meetings in which a wide variety of stakeholders make suggestions as to things they would like to see done.

Rather than focus on a few important items, the group sweeps the whole day’s collection into the “strategic plan.” Then, in recognition that it is a dog’s dinner, the label “long-term” is added so that none of them need be done today.

While it’s easy for most people to start coming with up with ideas about what to do (which is often what people end up calling their strategy), Rumelt succinctly articulates a picture of strategy that includes what too often is missing, which is first and foremost a thorough understanding of the situation, followed by a set of guidelines that are as much (or more) about determining what not to do as they are in determining what to do next:

A good strategy has an essential logical structure that I call the kernel. The kernel of a strategy contains three elements: a diagnosis, a guiding policy, and coherent action.

Learning about how to develop what Rumelt calls the diagnosis was the most fun part of the book for me, and he gives plenty of examples along the way. He also gently scolds the common pattern of labeling the problem as “underperformance”, which leaves an organization without a useful narrative besides “do better”:

One of the places where Rumelt really shines is hammering home the importance of coherence in a strategy — a connection between the diagnosis of the situation and the actions chosen (and not chosen):

A good strategy has coherence, coordinating actions, policies, and resources so as to accomplish an important end. Many organizations, most of the time, don’t have this. Instead, they have multiple goals and initiatives that symbolize progress, but no coherent approach to accomplishing that progress other than “spend more and try harder.”

The other key theme from the book was to really explain the nature and importance of choice in crafting a strategy — again reinforcing that it matters much more that you understand what is not worth doing as much as what is, and how that will usually run head on into institutional inertia:

Strategies focus resources, energy, and attention on some objectives rather than others. Unless collective ruin is imminent, a change in strategy will make some people worse off. Hence, there will be powerful forces opposed to almost any change in strategy. This is the fate of many strategy initiatives in large organizations. There may be talk about focusing on this or pushing on that, but at the end of the day no one wants to change what they are doing very much. When organizations are unable to make new strategies—when people evade the work of choosing among different paths into the future—then you get vague mom-and-apple-pie goals that everyone can agree on. Such goals are direct evidence of leadership’s insufficient will or political power to make or enforce hard choices. Put differently, universal buy-in usually signals the absence of choice.

That notion of institutional inertia put another way is that people resist change that they perceive as a threat, and Rumelt points out that even though we often assign the role of strategy creation to a leader, the role of a leader also involves helping the people within the organization understand and adjust to the inevitable change that will accompany strategic choices:

Leadership and strategy may be joined in the same person, but they are not the same thing. Leadership inspires and motivates self-sacrifice. Change, for example, requires painful adjustments, and good leadership helps people feel more positively about making those adjustments. Strategy is the craft of figuring out which purposes are both worth pursuing and capable of being accomplished.

Rumelt is of course not the first writer to emphasize the role of choice in setting a strategy. But he does the best job I’ve seen of describing the fundamental ambiguity that accompanies the kinds of choices involved with strategy work:

It is often said that a strategy is a choice or a decision. The words “choice” and “decision” evoke an image of someone considering a list of alternatives and then selecting one of them. There is, in fact, a formal theory of decisions that specifies exactly how to make a choice by identifying alternative actions, valuing outcomes, and appraising probabilities of events. The problem with this view, and the reason it barely lightens a leader’s burden, is that you are rarely handed a clear set of alternatives.

He also describes in a few short paragraphs one of the most challenging adjustments needed as people move into leadership roles, which is to become comfortable with discomfort (a skill you can cultivate with a regular mindfulness practice), lest we end up like one of Heinlen’s rationalizing animals:

Facing a complex situation like this makes most people uncomfortable. The more seriously you take it, the more you will see it as a real and difficult challenge that requires a coherent response. And that realization will, in turn, make you even more uncomfortable. It is so ill-structured. There are too many variables, so many factors, too many unknowns, no clear list of potential actions and no way to make clear links between actions and outcomes. You are not even sure what the problem is. Like a swimmer dropped into very choppy waters, it is hard to get your bearings. Under pressure to develop a way out of the difficulty, that first idea is a welcome relief. Thank goodness, here is something to hang on to! It feels much better to get oriented. The problem is that there might be better ideas out there, just beyond the edge of our vision. But we accept early closure because letting go of a judgment is painful and disconcerting. To search for a new insight, one would have to put aside the comfort of being oriented and once again cast around in choppy waters for a new source of stability. There is the fear of coming up empty-handed. Plus, it is unnatural, even painful, to question our own ideas. Thus, when we do come up with an idea, we tend to spend most of our effort justifying it rather than questioning it. That seems to be human nature, even in experienced executives. To put it simply, our minds dodge the painful work of questioning and letting go of our first early judgments, and we are not conscious of the dodge.

And again he reminds the aspiring strategist that even if one is able to adjust to ambiguity and uncertainty and set a suitable course, there remains the fundamental obligation of the leader to translate that uncertainty into something manageable and understandable to the rest of the organization, or even the best strategy will have little hope for succeeding: 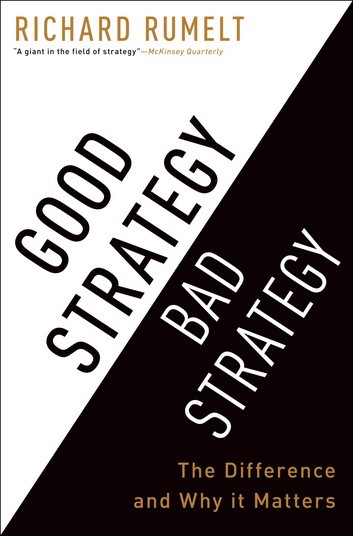