And because clear and effective writing comes from clear and effective thinking, not only will you get more effective at communicating with those around you, you’ll get better at thinking. How cool is that? And as Zinsser points out, if you don’t work to improve the clarity and simplicity of your writing, there are consequences:

Managers at every level are prisoners of the notion that a simple style reflects a simple mind. Actually a simple style is the result of hard work and hard thinking; a muddled style reflects a muddled thinker or a person too arrogant, or too dumb, or too lazy to organize his thoughts. Remember that what you write is often the only chance you’ll get to present yourself to someone whose business or money or good will you need. If what you write is ornate, or pompous, or fuzzy, that’s how you’ll be perceived. The reader has no other choice.

He starts the book quoting Thoreau from Walden, to illustrate exceptional clarity and simplicity in writing, and then states his case about the connection between what happens in your head and what ends up on the page:

How can the rest of us achieve such enviable freedom from clutter? The answer is to clear our heads of clutter. Clear thinking becomes clear writing; one can’t exist without the other. It’s impossible for a muddy thinker to write good English.

While it’s not practical to give the same care to most emails as you’d give the writing in a memoir or a novel, all leaders will spend at least some of their time writing things of import for a large (and often public) audience. Those who do it well are usually rewarded with a wider reach and more effective evangelism. Whether it’s a memo to the company, a blog post announcing a new product, or a think-piece for Medium to claim some particular intellectual territory, if it’s written well, it will be read more widely and understood more clearly.

One of the reasons that many leaders are eager to offload their writing to someone from PR or Marketing is that for someone already dealing with a complex and demanding job, it can be quite stressful to struggle with something as “simple” as writing. Yet “simple” is not the same as “easy”, and as Zinsser points out:

Writing is hard work. A clear sentence is no accident. Very few sentences come out right the first time, or even the third time. Remember this in moments of despair. If you find that writing is hard, it’s because it is hard.

One of his best pieces of advice is also one of his shortest:

Never say anything in writing that you wouldn’t comfortably say in conversation.

Business writing is notorious for sentences that run on far too long to support human breathing, using words that would sound absurd in most conversations. Even if what you’re writing isn’t intended as a speech, taking the time to read it aloud will help you spot where you’ve crossed the line. (I speak humbly from repeated experience…)

I often think of Zinsser’s advice when I find myself overwhelmed with a topic that started modestly but now seems insurmountable:

Therefore think small. Decide what corner of your subject you’re going to bite off, and be content to cover it well and stop. This is also a matter of energy and morale. An unwieldy writing task is a drain on your enthusiasm. Enthusiasm is the force that keeps you going and keeps the reader in your grip. When your zest begins to ebb, the reader is the first person to know it.

It can be liberating to remember that the reader won’t ever know about all the stuff you didn’t include, and often trimming back (“reducing scope” in product development parlance) can revive your energy and bring the piece to a close quickly.

Zinsser offers a refreshing reminder that as with most things a leader does, writing is best approached with a mindset of continuous learning and improvement:

You won’t write well until you understand that writing is an evolving process, not a finished product. Nobody expects you to get it right the first time, or even the second time.

Later on Zinsser said something that has stuck with me: “I don’t like to write; I like to have written.” (When I first read that my heart warmed instantly with the realization I wasn’t the only one who felt that way!) He says it as part of a longer passage describing the joys of revising and rewriting:

Learn to enjoy this tidying process. I don’t like to write; I like to have written. But I love to rewrite. I especially like to cut: to press the DELETE key and see an unnecessary word or phrase or sentence vanish into the electricity. I like to replace a humdrum word with one that has more precision or color. I like to strengthen the transition between one sentence and another. I like to rephrase a drab sentence to give it a more pleasing rhythm or a more graceful musical line. With every small refinement I feel that I’m coming nearer to where I would like to arrive, and when I finally get there I know it was the rewriting, not the writing, that won the game.

In The Hard Thing About Hard Things, Ben Horowitz praises the value of getting thoughts out of your head and onto paper, offering the example of how it helped him reach a critical decision. Zinsser helps explain why that works so well:

Describing how a process works is valuable for two reasons. It forces you to make sure you know how it works. Then it forces you to take the reader through the same sequence of ideas and deductions that made the process clear to you. I’ve found it to be a breakthrough for many students whose thinking was disorderly.

And like many of the books on this blog, Zinsser’s traces a theme of ongoing mastery, of striving and reaching and learning and failing along the way, all for the rewards those efforts bring in their own right, rather than as a means to an end:

We are a culture that worships the winning result: the league championship, the high test score. Coaches are paid to win, teachers are valued for getting students into the best colleges. Less glamorous gains made along the way—learning, wisdom, growth, confidence, dealing with failure—aren’t given the same respect because they can’t be given a grade.

On Writing Well is available from Kobo. 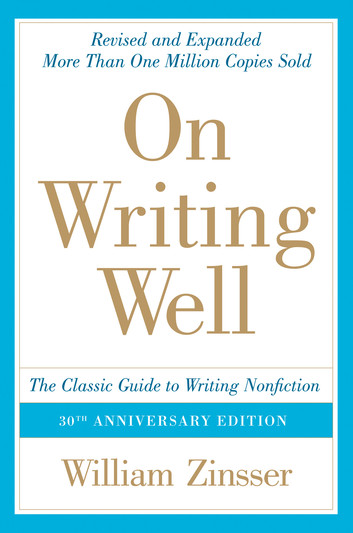